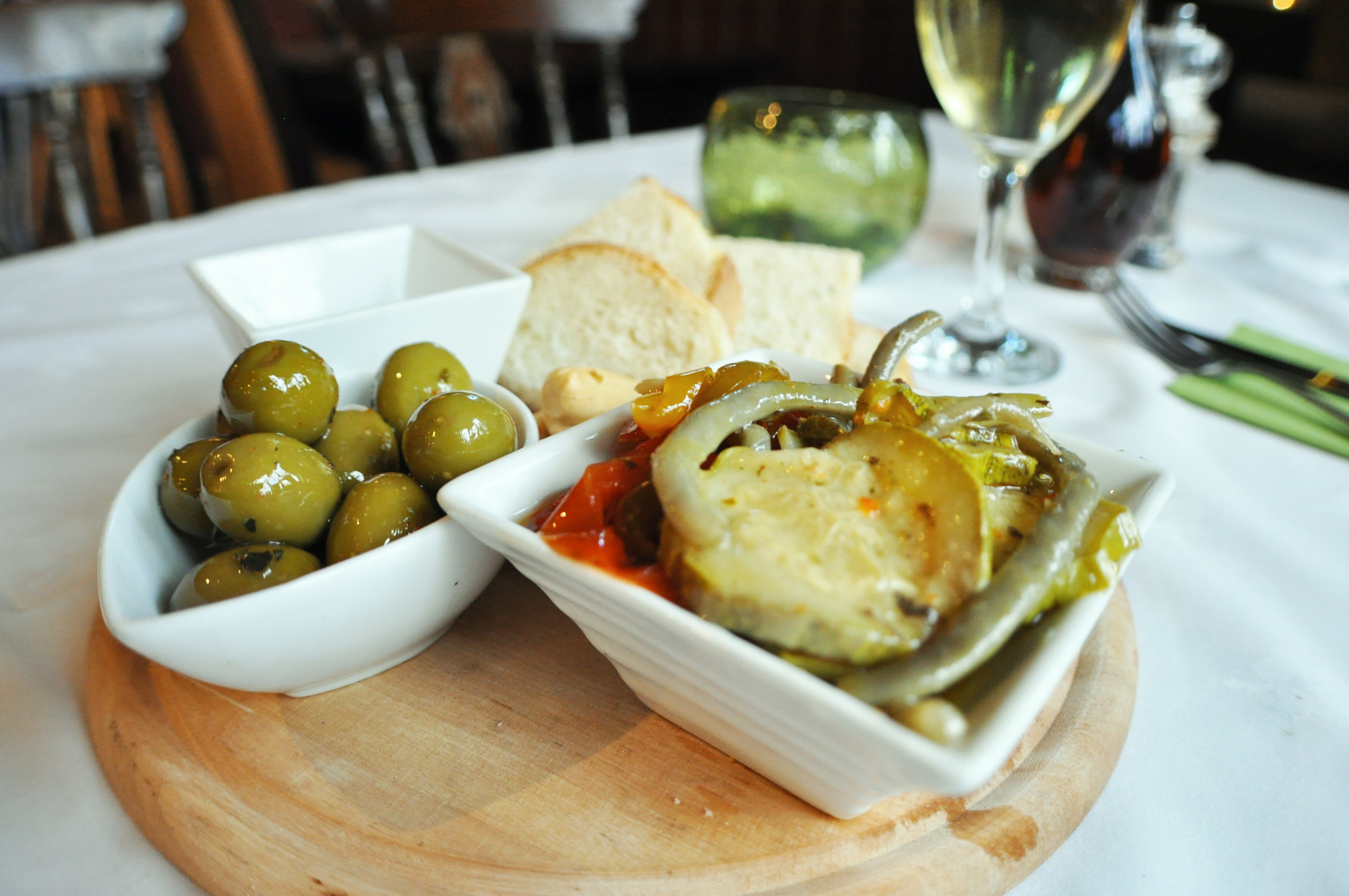 Published: FEBRUARY 24, 2011: La Pergola is one of the most welcoming restaurants in the area, much loved by its many regular customers for the quality of its authentic southern Italian cooking, and for the ever-friendly service offered there by the De Simone family. It’s renowned for its stone baked pizzas, which are freshly made in the restaurant’s authentic clay wood-burning oven, but the menu is equally packed with classic and original pasta dishes, salads, antipasti, chargrilled meats and traditional desserts. The ingredients used in the restaurant are all sourced as locally as possible, with many travelling no more than a few yards from the family’s own vegetable plot right beside the restaurant! Seasonal dishes recently added to the menu include rigatoni con salsiccia a pasta dish containing the family’s homemade sausages, which combine pork, fennel, wine, chilli and a hint of orange peel. Other great new dishes include a wild mushroom risotto using mushrooms picked by the family at a secret location and a Quattro Formaggi pizza with gorgonzola, provolone, mozzarella and parmesan. 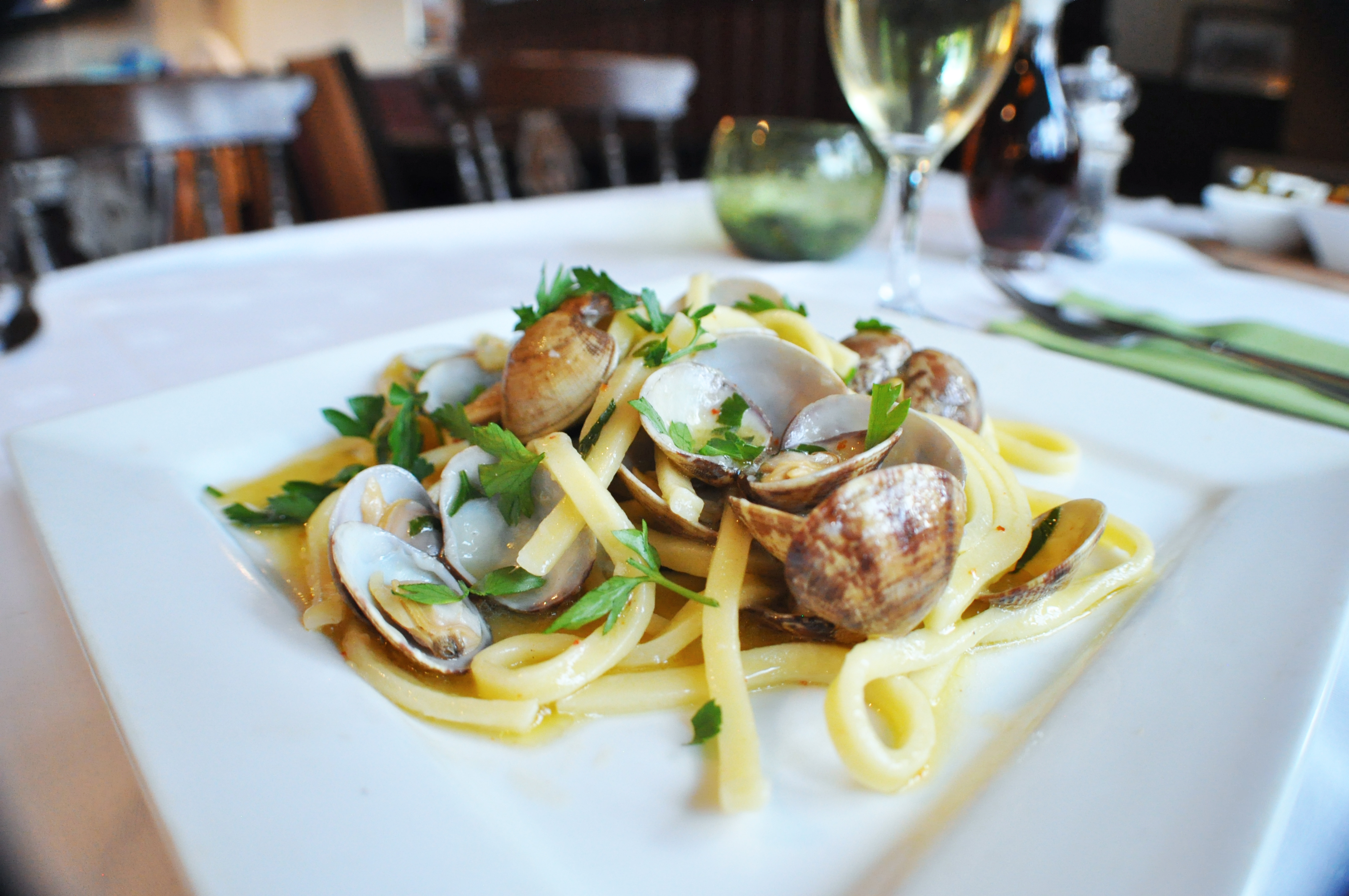 Published: 2009: Just a short jaunt out of Cambridge on the A603 beyond Barton, you’ll discover La Pergola, one of the most authentic and welcoming Italian restaurants you could hope to find. La Pergola is a real family affair: Giulio is in charge of the kitchen (complete with its stunning wood-burning pizza oven); his daughter Rosa and her husband Domenico take care of the front of house; his son Tony manages the bar; while Giulio’s wife ‘Nonna’ Maria bakes the superb home-made bread you’ll find here.

Giulio first came over to this country in 1962, and ran the famous Copper Kettle on King’s Parade for many years. Last year the family took over the freehold of the old Wheatsheaf pub here, and have since transformed it into the popular establishment that attracts customers from Cambridge and the surrounding villages.

The family’s roots are in the Campania region of southern Italy, and this is reflected in the delicious freshly-prepared food in which La Pergola specialises. The emphasis in this part of Italy (the region around Naples) is very much on pizza – which was invented there – and pasta dishes. La Pergola’s pizzas are traditionally made, from scratch, with the delightful crispy-but-chewy base you only get from handmade pizzas. They are excellent value too, with seven different varieties (including a well-stacked Quattro Stagioni topped with Parma ham, mushrooms, olives, peppers, mozzarella and tomato, and a Calzone folded pizza) ranging in price from £6.20 to £7.50.

The freshly-prepared pasta options are equally varied. Popular dishes include a classic spaghetti alla carbonara made with pancetta; linguini alla bella Napoli with clams and mussels; and the pasta ‘casareccia’ made with the family’s own homemade spicy sausage containing white wine, fennel and a hint of orange. The spicy sausage is also available as a main dish straight from the grill, as are an excellent selection of steaks, while seafood options include chargrilled tiger prawns and a sumptuous whole sea bass. La Pergola’s homemade desserts are another particular source of pride, with a rich and yielding tiramisu beautifully presented in a Lavazza coffee cup.

There are loads of lovely touches at La Pergola which make it a delightful place to visit for lunch or dinner, such as the home-made pickles which form part of their antipasto misto selection, or Nonna Maria’s homemade bread baskets. But the thing that really remains with you after a visit to La Pergola is its sense of character, the genuine welcome you’ll receive, and the sense of heart and soul that have gone into making this a truly authentic Italian experience in the Cambridgeshire countryside.

When you visit this former pub in Harlton you may not meet Giulio in person as he works in the kitchen.

You might spot him through the kitchen’s glass partition, plunging pizzas into the depths of a giant wood burning oven. You may also encounter his softly spoken son-in-law Domenico, with his neatly trimmed beard, who looks after customers as he glides around the spacious white-walled dining area.

The De Sorrento clan took over in 2007 keeping the bar area open for the locals whilst building up the restaurant side and adding plenty of little reminders of the home country, such straw-bottomed chianti bottles.

Speaking of wine, whilst the wine list is modest, it comes by the carafe as well as full bottles, allowing drinkers to order the amount they actually want.The menu itself features all the usual Italian staples, such as pasta and pizza, along with a slowly increasing range of home-made dishes, including the bread, pickle, a spicy sausage made with fennel, and of late the vegetables and herbs are grown in a plastic polytunnel round the back. La Pergola runs an English-style Sunday Lunch menu at the weekend, so we stopped by on a weekday evening to try out more of the Italian cuisine.

A mixed antipasto starter with Parma ham, coppa and salami warmed our appetites nicely before we tucked into our main courses of the piccante pizza and the ‘Misto Di Carne’, the Italian equivalent of a mixed grill. The sausage proved playfully spicy upon the crispy pizza base whilst the grill satisfied with its endless little chunks of tender meat and baby potatoes. So filling were the dishes that we planned to go easy with dessert, an aim that went awry when the lemon sorbet arrived in a massive sundae glass. Portions here come in one size: large.

La Pergola prices seem reasonable for the cuisine style and quality. No doubt this is why despite occupying a lonely spot the restaurant seems busy particularly on weekend evenings. Although we dined inside, as we left we spied some empty espresso cups lying on a wall in the terracotta brick-lined patio area outside, which seemed just the spot for our next visit. 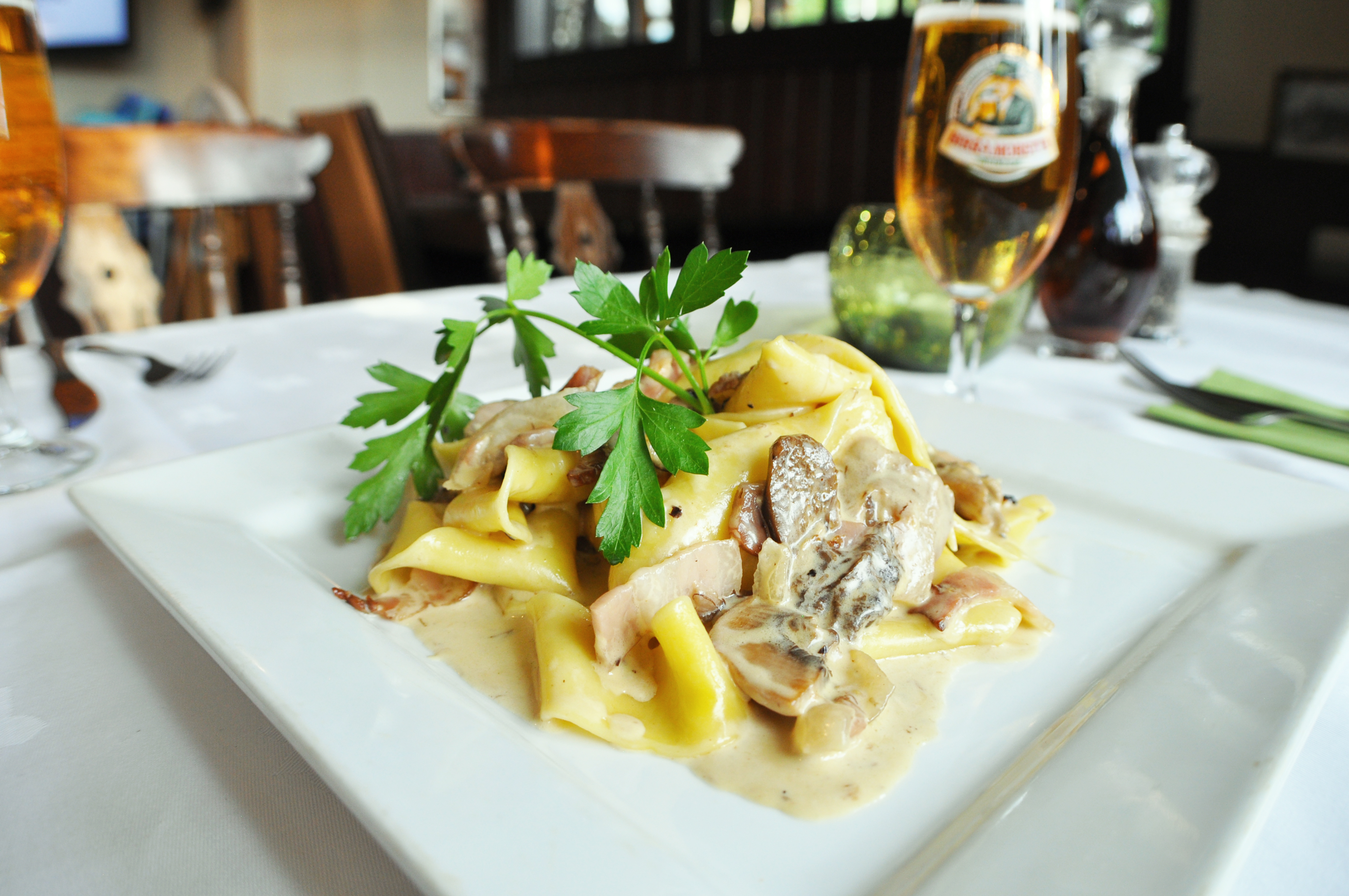 Published 2009: La Pergola, a former pub (The Wheatsheaf) on the road to Wimpole Hall, is situated on a lonely spot south of Cambridge near to Harlton just as the hills of South Cambridgeshire start to roll upwards from the fens. Totally renovated and reopened in August 2007, the owners were obliged to keep the establishment open as a pub placing it into the unusual category of a restaurant with a pub attached, as opposed to more usual pub that does food.

The restaurant fills a cavernous barn-like structure in white plaster alongside the pub and is dominated by a wood burning pizza oven – into which diners can observe their orders being plunged and then retrieved from the inferno. Complementing this, the dining area is full of little Italian touches such as straw-based wine bottles. On our trip we marvelled at how large the restaurant seemed and at how full it was despite this.

New it may have looked but La Pergola’s menu is old-school Italian based upon the trinity of pizza, pasta and profiteroles! The de Simone family who run La Pergola hail from Sorento in Southern Italy and have been running restaurants around Cambridge for the past forty years, notably the Copper Kettle on King’s Parade. Based around the traditional Italian dining format of Primo, Secondi and Dolci it’s very easy to saunter into La Pergola and inadvertently order a full Italian feast.

Highlights include a few home-made ingredients on the menu, notably bread and sausage. The bread is delicious and dense, an ideal accompaniment to olives. The sausage, made with fennel, is quite spicy and is served on its own as a main or as a pizza topping. Given the prominence of the pizza oven no trip would be complete without trying one. The one we tried was crispy thin pan and quite delicious. On our visit the overall winner was a tasty roasted Sea Bass with an especially flavoursome skin. Watch out though for the high-powered ovens. Certain dishes carried the latent heat capacity of a volcano when deposited on our table.

Clearly a popular destination, La Pergola briefly becomes more English pub than Italian bistro on Sundays when the traditional English Sunday lunch takes over the menu for the afternoon.

A pleasant Italian restaurant in a thoroughly pleasant place La Pergola is worth a visit especially to watch pizza being made. 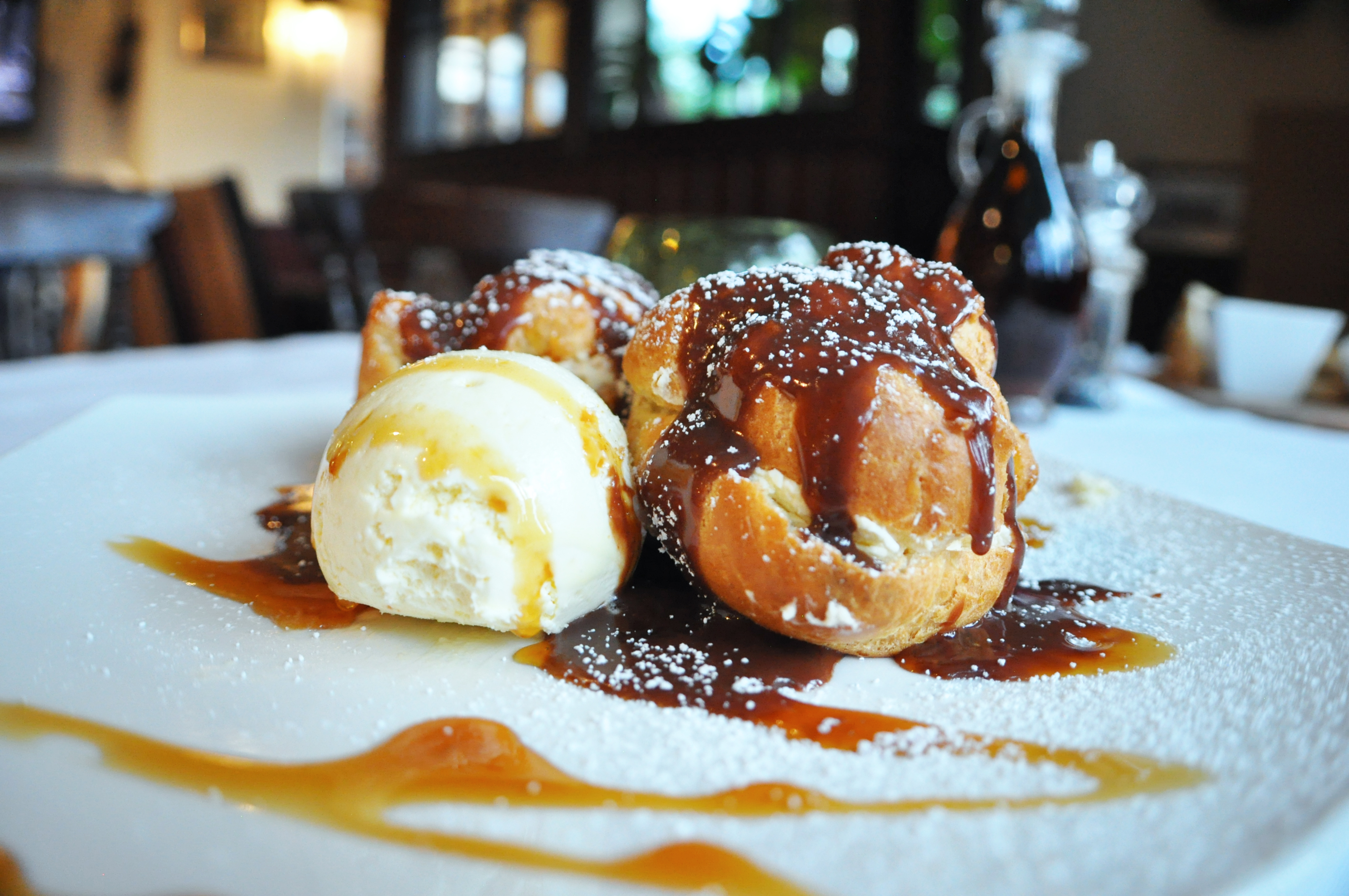